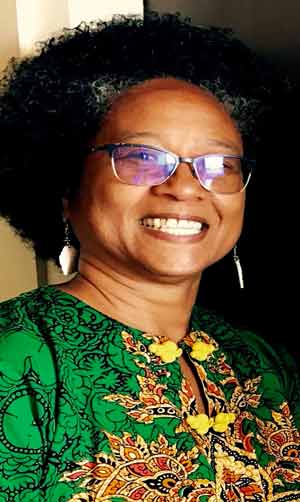 Iyawo Lu is a licensed bodywork practitioner and co-founder of Luna Nueva Wellness Collective. She descends from a lineage of healers on both sides of her family. Before embracing her path as a conduit for healing, Iyawo Lu earned her bachelor’s degree and teaching credential at San Francisco State University. She taught for more than twenty years in the San Francisco Bay Area and in Dublin, Georgia. Iyawo Lu was a founding member of Nea Community Learning Center, a small, dynamic, tuition-free public charter  school in Alameda, California.

Her formal healing arts education began at the San Francisco School of Massage where she earned  certification as a massage bodyworker with a focus in the western modalities. Iyawo Lu’s desire to learn traditional forms of  bodywork found her in Bangkok, Thailand to study Thai Massage at the Wat Pho Traditional Massage School. Her love of travel brought her to Aotearoa (New Zealand) to participate in ‘‘Te Rongopae-Clear-Bright Horizon’ workshop. This workshop, instructed by Atarangi Muru and Charlotte Milton, offers traditional Maori bodywork teachings. Heeding the ancestral call to include traditional Chinese Medicine, Iyawo Lu earned certification in Tui Na massage at the Academy of Chinese Culture and Health Sciences in Oakland, CA.

Maintaining a form of practice to fortify one’s balance in life is important, especially in our current times. Iyawo Lu has been a practitioner of Tai Chi (24 set) from a young age learning from Leurng Sifu in SF Chinatown and has added the practice of chi gong exercises with Wu Dang West Cultural Heritage Center in Oakland. In addition to her tai chi practice, she also earned certification as a Basu of Kemetic Yoga.