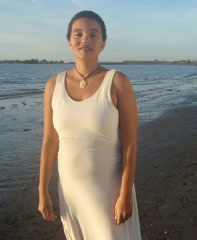 Heaven is a High Priestess, Scholar, Professor, Writer, and a member of the American Academy of Religion. She attained her MA degree is Philosophy, Religion, and Women’s Spirituality in 2007 and is currently pursuing a PhD in the same field. Her publications include “Bringing the Ancestors to the Table” in Bringing Race to the Table: Exploring Racism in the Pagan Community, “The Many Faces of Athena” in Shades of Ritual: Minority Voices in Practice, “Invoking the Queen” in Shades of Faith: Minority Voices in Paganism,  “Our Family Coalition” in The 21st Century Motherhood Movement: Mothers Speak Out on Why We Need to Change the World and How to Do It and “Reclaiming Aphrodite - The Power of Sisterhood” in the Awaken the Feminine: Dismantling Domination to Restore Balance on Mother Earth. Heaven Walker is an Elder and co-founder of the Starflower Pagan Congregation , and  a legally ordained interfaith minister who offers spiritual counseling, wedding ceremonies, and rites of passage. However, Heaven considers her most sacred work to be motherhood and is a member and facilitator of  the “Sprouts” pagan parenting and ritual group. She hopes to eventually co-create an earth based spirituality centered children’s scouting troop.